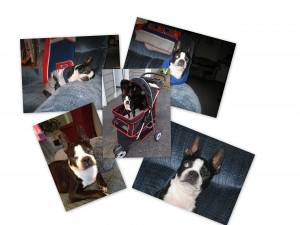 Chloe – living the life she deserved to live.

Chloe spent the first several years as a breeding dog, trapped in a wire cage, bred at every heat cycle, her puppies whisked away and sold by brokers to pet stores or internet dog sellers.  She was deprived of any sort of basic care and suffered injury and infections that were never treated.  She was seized in a drug raid (her owners were not just making puppies!) and dumped in a high kill shelter in Jefferson County, MO.  One of our caring volunteers clearly remembers the day she found her- with eyes so infected that she has lost her eyesight, she was huddled in the corner of a concrete stall, alone and crying.

She was rescued, and given much needed medical care.  During her spay surgery, she was found to have ovarian cancer- a direct result of being bred so often.  She was placed in a loving foster home for further care and rehabilitation, and one of her damaged eyes was removed.  And after months of loving foster care she was adopted and began her life as a pampered pet.

And Chloe was loved- not just by her family, but by all her knew her. She had many, many adventures and became well known in her hometown for her gentle spirit and indomitable will to live her life well.  She loved everyone she met, was generous with her kisses, and tenacious in her pursuit of her favorite hobby- eating!  She stoically endured treatment for further health consequences of her years of mistreatment- she had surgeries twice as she developed mammary cancer- again, as a direct result of overbreeding- and eventually her other eye was removed.  Her blindness never stopped her from enjoying her life, as she absolutely fearless in exploring her surroundings and had developed a sense of trust in humans.  She was an ambassador for rescued and disabled dogs, and never met anyone she did not consider to be a friend.

Although Chloe survived and flourished through so many difficult times, she was not able to survive the brain tumor which took her mind, and ultimately her life, earlier this year.   Chloe crossed the RainBow Bridge in August of 2012.

It is for Chloe and the countless other dogs in wire cages, concrete stalls, in abusive homes and alone on the streets that we continue to rescue. It is our mission that every dog have a loving home and our work will not end until then.